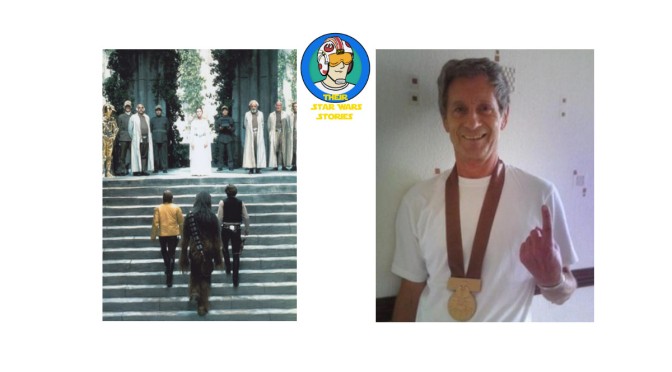 Rise of Skywalker is here for us amid the lockdown and wraps up the “Skywalker Saga”. It’s fitting then that we have an interview from the film that started it all, A New Hope.

In Rise of Skywalker (Spoiler Alert) our favourite Wookie, Chewbacca, gets a medal to correct one of the biggest issues in the very first film in which he doesn’t get one for his part in the Rebel victory. Nick Joseph, our guest today, is not the reason for that although he did have the role of handling the medals…maybe one was dropped? Maybe someone casually stole one? Is it because Wookies already stand out in a crowd? This is not a website to answer such questions.

However, Their Star Wars Stories does wish to tell the tales of the people involved in the franchise and in that respect, Nick Joseph is indeed the Medal Bearer we are looking for…

Thanks for talking to us, Nick. I’ve been reading up about you and your story after Star Wars is quite interesting, but let’s start at the beginning first. How did you get involved in A New Hope?

My agent at the time contacted me and said would I be interested in a cheap movie called Star Wars, it’s just a two-day shoot, so I said yes, naturally. I went along to interview for the character of the Medal Bearer in Mayfair, London and it was a really quick process. I got the part two days later.

What happened was we did all of the shots in the first couple of days and they called me back for doing the close ups. It was just a two-day job as a start but I kept being called back for more shooting. Looking back it’s funny, at the time when I was hired I didn’t know who George Lucas or Gary Kurtz were and look how well they did.

Since that your character “The Medal Bearer” also got given the name of Major Arhul Hextrophon and was part of one of the most famous scenes in Star Wars. How was it being a part of that?

I feel that I am very fortunate to have got that small part looking back at it all now, and the answer to your next question will go into detail on a very funny behind the scenes story of that scene. The character has had a lot of his own stories now and some fans even made a small movie about him where he is only one of three people to have found Master Yoda due to his role as a historian.

I have a regret about my time on the film, I wished that I had the contract instead of the buyout as payment. They offered us a contract which was a percentage of the movie sales or £600 and I took £600, which was a lot of money back then. I have never ever done that since.

What would you say is your best story from working on Star Wars?

Something that may be of interest is that during the medal scene someone farted and not just a small one but so loud that we all cracked up. We had to restart shooting that scene five times because we all cracked every time the doors opened for Han, Luke and Chewie to walk down.

My best memories are working with Carrie Fisher and Mark Hamill, we had a few funny moments filming that scene. I was speaking to Mark, Mark started smiling, the next thing Carrie threw water over me saying she got her own back because I had mentioned she looked like a throwback from Victorian times. Carrie was a great girl, very funny, witty but you would never turn your back on her as you didn’t know what was coming next.

Oddly, you are not the first interview on this site to say that Carrie Fisher messed with you! Personally, you went on to have a few roles in Doctor Who. Were you drawn to Sci-Fi roles at the time?

I did have a few roles in Doctor Who, with Tom Baker in “The Leisure Hive”, Peter Davison in “Black Orchid” and “Terminus” and with Colin Baker in “The Mark of the Rani”. Tom is the only Doctor I haven’t done a convention with, actually.

I wouldn’t say I was drawn to Sci-Fi but I was just lucky to be in the right place at the right time. I look back at the acting work I did very fondly, and Star Wars and Doctor Who were definitely my biggest roles, but for me Star Wars will always be most important. I just like to do comic cons and conventions now. I was supposed to be in Guatemala actually and had 26 planned throughout the course of this year.

Not exactly a bad couple of acting jobs to say that you had there, Nick, you should be very proud of those roles. I want to go back to what I mentioned at the start…due to the size of your role you lost touch with the Star Wars community. Apparently, you were tracked down by Star Wars and Empire producer Gary Kurtz. What is the story there?

Yes I didn’t know a great deal about the convention scene linked to Star Wars until Gary got in touch and asked if I would like to attend “Empire Day” at Elstree Studios, which is a reunion event for those who worked on it. I went along with very few expectations and oh boy there were so many fans there interested in me, I was so surprised! I must have signed 1,000 photos that day and that was the start of me really loving this convention scene. All I can say is thank you to the Star Wars fans for their enthusiasm and passion.

As the event finished, I saw Gary and I said to him, “How on earth did you find me?” and before he could answer I said, “Well thank you, I’ve loved doing it”.

You are a big hit on the convention scene. How do you feel about attending events like that?

I feel very honoured to be invited to Comic Cons, conventions and private signings. I have travelled the world from the USA to Australia and many countries in between. As you know all events have been cancelled at the moment, which is a huge shame, so I hope we are doing them again in 2021.

Fans know exactly what you’ve done better than you know what you’ve done yourself! I love it, you can have a good laugh and a joke with people. I get people contacting me asking where I may be next to purchase autographs and things like that. Fans are the people who keep inviting you; it’s like a big Star Wars family and it’s wonderful.

I saw you have reproduction New Hope medals when you attend conventions. They must be popular?

Just this month I’ve sent them to China and Russia. They are reproductions of the actual medals. A good story related to that; I have a friend called Matt who lives in Brisbane with his family, he went on holiday to Florida to see a friend of his who used to work for Lucasfilm. They were talking and Matt mentioned me and my role. His friend Tony said he knew of me and gave Matt the actual Medal of Yavin given to Han Solo in A New Hope to pass onto me, which is really lovely.

With the unfortunate circumstances that we are in, do you have any updates for fans?

I have nothing in the book now because due to the virus they are all cancelled or delayed. I can’t wait to meet fans again as I enjoy it so much, but anyone interested can get a hold of me on Facebook or my signing shop in the meantime. I’m always happy to hear from the Star Wars community.

Contact Nick directly on Facebook here and in the absence of conventions you can check out his online autograph store here where you can buy a replica “Medal of Yavin”.

Did you enjoy reading this interview? Why not check out the Star Wars story of Kenneth Coombs, an incredibly experienced actor who had a role as an Imperial Officer in Return of the Jedi. Read more by clicking here.

One thought on “Nick Joseph – His Star Wars Story”