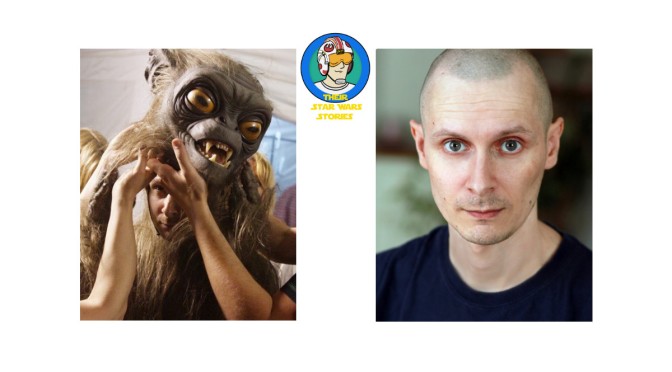 “I like that Wookie,” to quote Maz Kanata, as she pines for good old Chewie. But here’s a question, would Maz have been so keen on our favourite walking carpet if he had followed his original design?

In The Force Awakens we are introduced to a creature named Varmik, a Hassk thug brought to life by our guest, Paul Warren. Varmik is an interesting character as was he was based on 1975 Chewbacca concept art by Ralph McQuarrie.  The legendary status of McQuarrie’s design and illustration work was a motivator for director JJ Abrams to bring Varmik to life in the movie.

Impressive character back story aside, we are here to learn about Paul’s Star Wars story. It’s the usual stuff, doubling as Harry Potter in Order of the Phoenix, playing a skinny Captain America, Zombie in World War Z, young Magneto in X-Men: First-Class…

Okay, so it’s not the usual stuff…it’s a great story and one that’s bound to carry Paul on to even bigger things. Anything else? No? Let’s get into it…

Thanks for talking us through your Star Wars story, Paul. How are you keeping at the moment?

Hello! Well, all my work for the year has been cancelled due to corona virus, so it’s been incredibly difficult, as it has been for many people. Having your income and industry wiped out overnight is very surreal.

It’s very stressful for all at the moment! For someone with your experience, in your position how do you de-risk in your career and make sure there are other sources of income?

It’s a good question. As jobbing actors we would normally do other work between film jobs in tough times. Something like bar work or sometimes maybe a signing convention somewhere in the world. That is obviously not an option now. I’m still trying to figure it out, but yes, it’s very tough times for all.

We should get onto some lighter topics… You got into film initially by appearing in Children of Men, which is a seriously underrated film by the way, and doubling for Daniel Radcliffe’s Harry Potter. How did that take you all the way into the Star Wars galaxy?

Children of Men turned out to be a very gruelling yet incredible experience. It was my first film and I had no idea that the very long and cold shooting days were unusually tougher than most films. It was a very technical film, which required everyone to be on their game. It was pretty intense on set, but Alfonso Cuaron is a master filmmaker, so being able to watch him direct everyday was a free film class in itself.

I was on the film for a few months, networking and getting to know people in the industry. I didn’t realise it at the time, but I was creating opportunities for my future career. One job just seemed to lead to the next and before I knew it, I was given mostly creature work. The more I did the more I was getting known for it.

And looking at your journey into Star Wars, I noticed you’ve got a very interesting credit to your name. You were also “Skinny Steve Rogers” in Captain America: The First Avenger, is that right? That must have been quite an unusual role to get!

I was one of them, yes. It was very cool to be a small part of a very big visual effect.

The main double was Leander Deeny. I was skinny Steve in the pre-production VFX tests. I was also on set as a visual reference for the recruitment scene, along with Leander, who was the body double for the remainder of the film.

Due to The Force Awakens being the triumphant return of Star Wars, there was obviously a lot of excitement for those involved. Were you a fan of the films yourself growing up?

I was around four when the original film came out. I’ve been a fan of Star Wars pretty much my whole life, so when I got the call to go in and talk with the creature department on The Force Awakens, I almost lost my mind ha-ha!

I get a buzz from the stories hearing about how actors and performers discovered what roles they were going to get in the film, and I can only imagine what that feels like. How did you find out who your character was going to be?

I had no idea who I was playing until Neal Scanlan (Star Wars CFX supervisor) pulled out a Ralph McQuarrie book and was showing me the cantina alien painting from 1975. I’m a massive fan of McQuarrie’s work and I had that picture on my wall at home!  Neal explained that JJ Abrams really loved it and wanted to bring the character to life in the film. So that’s what we did on the day; we tried to bring the painting to life in that steady cam shot into Maz’s castle.

What would you say is your best story from working on Star Wars?

The day I was shooting my Varmik movement for the steady cam shot was the day Mark Hamill and Kenny Baker were on set to watch. That was very exciting and nerve-racking! At one-point Mark came over to chat. He was just as lovely as you would hope, and he loves all the alien stuff. He would visit often to geek out. We spoke about how the animatronic head worked, how I was providing the movement and a puppeteer was operating the facial expressions remotely. He was genuinely fascinated by how it all worked.

Mark came to the creature department on the The Last Jedi, too. There is a scene in the documentary ‘The Director and the Jedi’ on the Blu-ray where Peter, one of our creature performer pals, is apologising to Mark for not knowing it was him (Mark Hamill portrayed tiny casino drunk, Dobbu Scay, in The Last Jedi). What you don’t see is that shortly before that, Mark was talking with Peter and I just off the set. Peter hadn’t even realised it was Mark the whole time as he was inside his creature costume and could hardly see or hear a thing! He couldn’t believe it after when I told him it was Mark Hamill.

How did you feel personally playing Varmik in that scene?

A little bit of everything, actually. Mainly I’m focused on trying to give the director what he wants, to deliver a performance that fits his vision. That’s what my job is essentially. That said, I was smiling a lot inside the creature head throughout most of the shoot.

Varmik must have been a cool character to be given for a fan of the films. He’s based on the original Chewbacca designs and, the crowning glory, he has his own action figure. Do you feel close to the character now?

Varmik was very cool to portray. I had a copy of the 1976 production image it’s based on signed by Ralph McQuarrie on my wall before I worked on Stars Wars. It’s almost as if it was meant to be…

It might sound silly to some people, but one of the things that I feel is a major accomplishment as a creature performer is playing a character that was made into a toy. There is an action figure and a Funko pop currently. I love all that stuff.

Does Star Wars top the other roles you’ve had to date?

It’s definitely going to be a tough one to beat.

When you got called back for The Last Jedi to be a Dowager alien, did returning have a different feel or the same levels of excitement?

I was honoured and flattered that I was asked back to portray another character. It was a slightly different challenge for me this time. I was inside the large creature in my normal clothes, puppeteering her head and movement from the inside.

Daisy Beattie remote puppeteered the creature’s pet pug ‘Gary’ from behind the set with Chris Clarke, who was remote operating the dowager’s face. It was hard work, but a lot of fun working as a team to bring her to life. Meeting Rian Johnson was also a highlight. He’s a lovely guy and a brilliant director.

How do you feel about your experience so far with the Star Wars galaxy and the appreciation you get from Star Wars fans?

I’ve been lucky enough to be invited to quite a lot of comic cons. Overall everyone has been so nice. I love travelling around the world and chatting with people about the films. The ones that don’t like The Last Jedi have no problem telling you that, ha-ha! I think The Last Jedi is a masterpiece. I think it’s a beautiful and brilliant film and deserves more love…

Couldn’t agree more, and thanks, Paul, for your time talking to us. Keep checking back for more Star Wars Stories and until the next time, I’ll be there for you…Cassian said I had to.

Did you enjoy reading this interview? Why not check out the Star Wars story of fellow creature performer, Keith De’Winter who featured with Paul as Goss Toowers in The Force Awakens, by clicking here.