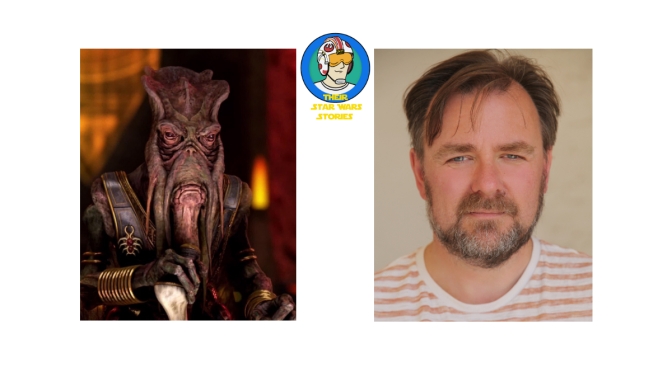 Hello there! Death Star sized appreciation for you coming back for another Star Wars story. Our guest today is a man of many talents, he’s many Clone Troopers, he’s Poggle the Lesser and he’s the double for Ewan McGregor’s Obi-Wan Kenobi among many other roles in the Star Wars prequels.

Richard Stride appeared in blockbusters like Gladiator and First Knight before moving onto Star Wars, he worked on Attack of the Clones and Revenge of the Sith putting his professionally trained sword skills to good use before successfully setting up his own theatre. He also designed the Death Star (technically), so don’t mess with him, I certainly wouldn’t…

Thanks for talking us through your Star Wars story Richard, how have you been keeping busy through lockdown?

I think for most people it’s been a time for reflection and finding out what you want to do and that sort of thing, I’ve been doing a lot of workshops online, writing, making connections with industry people and apart from that I’ve been turning the garden into what looks like something out of Hampton Court Palace…

I hear that’s a common hobby now! I understand you run a theatre, is that right?

That’s right, I took a burnt out, derelict building which had literally nothing in it and renovated it. I was artistic director there for 20 years but just before lockdown in early April I left to pursue acting and concentrate on myself, the theatre is now run by a trust.

How has lockdown affected the theatre industry?

The pandemic had a big impact on theatre and its employees obviously as they are all closed. There is a good thing with the way I designed that theatre specifically; we didn’t have rows of seats, we had cabaret style tables which means that to a degree people were socially distanced anyway! Hopefully, they’ll take the bull by the horns and get open as soon as possible.

How did you get started with your acting career?

I had an interest during school and then I joined a local drama group. Out of drama school I went straight into a Hollywood movie called First Knight. I found myself going from pretty much one job to the next which was fantastic. I did a lot of film work, some TV and a bit of stage work. I thought I wanted to do more stage work and more Shakespeare particularly so that’s when I started up the theatre.

I saw you were in Gladiator which must have been epic to work on, but I do have a soft spot for First Knight as I was really into Arthurian legends as a kid. When I saw those films on your IMDB I did wonder how do films of that size help to prepare you for future roles?

First Knight was great as I did lots of sword fighting and I am a trained sword fighter, so it was great to do something I was highly skilled at. Different skills are really important in becoming an actor and for finding your way into the industry, they help you to find your niche and that allows you to get a foot in the industry.

We should probably get to the point of why we are here! You had an interesting time in Star Wars Episodes Two and Three with a variety of different roles, can you talk us through them?

I was a double (for Ewan McGregor) so they would do a lot of over the shoulder shots and we looked very similar, incredibly so actually. We wore the same hair piece and you could literally not tell the difference sometimes. Samuel L Jackson particularly confused us a lot, calling me Ewan and then seeing him shocked when an English accent came out of my mouth.

I was also Poggle the Lesser, I was various Clone Troopers and I stood in for a lot of characters. I stood in for Yoda even though I am six-foot-tall, they had a puppet and I did the lines! I was also the droid walking up to the opera house in Revenge of the Sith, there were lots of different things going on and it was brilliant, I loved it.

It’s interesting because on the other trilogies it seems a lot of the actors and performers had a small amount of time working on the films, but it sounds like you had a lot of involvement…

Yeah it was literally weeks. There was the odd day where I didn’t do much and others where you are working constantly. It’s tough sometimes because if you are there for twelve hours you are probably reading a good book for ten of those hours but they kept calling me up to do different things.

It was lovely to be really helpful and have a part in the history of it all, watching and observing others. What makes acting interesting is the learning side of it, if you stop learning you get bored!

How did the role originally come about?

I sent my showreel off to George Lucas and got the call to go to Elstree Studios at very short notice! I made it to the audition thankfully and there was this guy walking along and I said, “I’ve got an audition for Star Wars do you know where I should go?” He said he would take me, it turned out to be Rick McCallum the producer! He didn’t let on that he would be auditioning me which was classic. After the audition it went quickly, and I was told I’d got the role. I started the day not hearing anything and ended the day a part of Star Wars…

What was your fondest memory of working on Star Wars?

There were a lot of iconic moments. They rarely played the music but one day the Darth Vader music was playing when I was sat reading a book. I see gradually rising in front of me, Darth Vader in the scene at the end of Revenge of the Sith. As a child I watched these films endlessly, so it was a moment I loved.

I met a chap who I assumed was a crew member and we were just chatting, I asked what his role on the film was and he said “I’m C-3PO”, I said you don’t do the voice do you? “I’m C-3PO human cyborg relations” he blurted out literally a foot away from me. He (Anthony Daniels) showed me all the parts of the costume on a table nearby that was amazing too.

Was there a different skill set in your opinion working on the prequels compared to the original trilogy and the sequel trilogy?

It was all very new technology at the time. I think the type of camera they had on Attack of the Clones was the first time it was ever used in history. It was a whole different set of rules for filmmaking. I guess thinking about it there were probably a lot less actors as we were all doing multiple roles. Quite often you are stood in a blue box and had to imagine everything around you. I was in a battle scene holding a gun but the gun didn’t even fire, there’s no sound and you’ve got 60 people watching you and you are thinking, “I must look like a right tit.”

What I did was close my eyes for a few seconds and just picture that world around me, the sounds and everything else. It’s hard because clearly, you’ve got no threat around you and you are supposed to try and imagine all this stuff going on. There’s one scene in Attack of the Clones where I was all nine characters in the shot, a fan came up with the photo for me to sign, I asked where he would like me to sign and he said on whichever one is me which is a bit hard when you are all of them ha-ha.

George Lucas said something interesting once about this, he said one day they won’t even need to costume people, actors will just be in a blue suit. I think what was used was very ground-breaking, but it was in its infancy. Some of it was just too clean and I think they now are moving towards a combination of the real stuff and the green screen so that will probably work better in the future.

It must have been nice to have such involvement and have a named character too as Poggle the Lesser who has his own action figure and all that with you being a big fan too!

Yes it’s all been very useful, we had builders in the other day and the builder was saying something they were not too happy about and I said, “You do realise I invented the Death Star” it’s always a useful thing to say ha-ha!

Do you enjoy the conventions side of it?

What’s lovely is telling the stories about the experiences, reliving all that and keeping it fresh in your mind. People get so excited about the smallest nugget of information, it’s like you made their year!

You’ve already mentioned you sort of moved away from the theatre and you are trying to get your acting career going again so what’s up next for you?

I’ve got two films pencilled in, one is a small part playing a drug dealer which will be fun and the other is a period film and that’s a bigger role, they may get postponed a bit but hopefully it will all be OK.

Thanks to Richard for joining us! We’ll be sure to share on Facebook and Twitter any future roles Richard has, hopefully one will be back in the Star Wars universe!

Did you enjoy reading this interview? Lightsaber wielders must be your thing so check out our interview with Andrew Lawden who stood in as Qui-Gon Jinn in The Phantom Menace. Read more by clicking here.