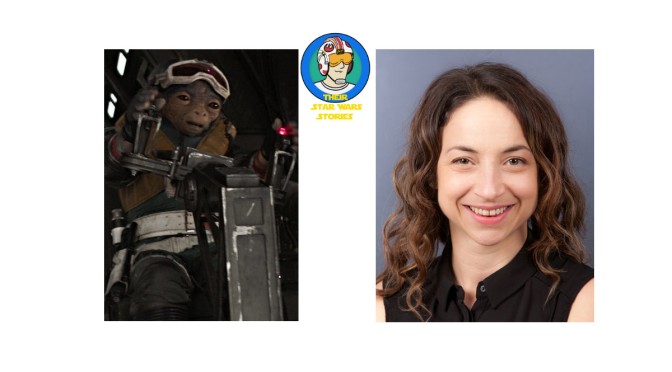 You guys really have it bad for Their Star Wars Stories, don’t you? Well it’s mutual, trust me.

It’s a dark time for the world and there’s a need for good, positive stories. The story of Katy Kartwheel is just that. With not one but three appearances in Star Wars films, Katy is certainly well placed to tell her story but little did we know how amazing it would be. A story of chasing your ambitions and following your own path takes Katy from dreams of the circus to homelessness to an advertisement that would change her life, culminating in the creature performance role of Rio in Solo: A Star Wars Story.

It’s probably better that Katy tells the story from here on out so let’s get right to it! Katy thanks for agreeing to talk to us and I’m excited for you to share your Star Wars story. Before we get started on Star Wars, I’ve read the personal section on your website and frankly, it’s amazing, so can you share your journey from becoming homeless to the travelling circus to Star Wars?

I became homeless in a way because I was searching for the circus. At 17 straight after school I was in an office job and I wasn’t happy so I went to see a careers advisor and we went through what I liked, including drama and gymnastics, and she found this circus course so I enrolled.

Things didn’t work out. I ended up on the streets and it wasn’t as simple as just popping back home, so I chose to stay in a homeless shelter for a while to get myself back on my feet again. The most amazing thing happened where I was in this shelter and I saw an advertisement for one person to run away to the circus. It was fate.

I was the only person who applied and then went travelling with them and learned with them. The whole experience was like a light for me. I then worked with some circus schools and companies and one of them was Aircraft Circus. They really helped me get to a good level of performing. It was the director there who called me one day saying there is a movie looking for a short stilt walker; I didn’t know what the movie was. I ended up in a warehouse walking around on stilts, and there were some conceptual designs for the character which turned out to be HURID-327 in The Force Awakens.

Apart from the Bollywood film (Jab Tak Hai Jaan) The Force Awakens was your first experience in a movie, is that right?

Yeah that’s right, the Bollywood part was just a little thing but I ended up interacting with the King of Bollywood (Shahrukh Khan), who I’d never known about before. I went in as an extra but there were a lot of girls screaming “It’s really him!” He’s a huge personality!

So virtually no film experience to then end up in Star Wars via the circus. Do you feel lucky in terms of how it has all worked out?

I don’t think it came from nowhere but I feel really lucky of course, there are certain things I wanted to achieve in my life and I really worked hard to get there. I just wanted to make it, put all my effort into getting to where I wanted to be. You know what life’s like, sometimes it gets in the way of living out your passion and your dreams.

I suppose we should talk about Star Wars! What was your personal feeling when you got the role in as HURID-327 in The Force Awakens?

I was taken aback; I was trying to be cool about it and take it in my stride. I couldn’t tell anyone anyway and it was all very hush hush. To be honest it wasn’t until I saw it on the screen at the cinema when I was like, “This is massive!” Even though it was just six seconds and you can’t tell it was me, it’s still a big achievement!

I know you say it’s only six seconds but that moment in The Force Awakens is one of the first moments in the film that you get to see a new world, and HURID-327 is the first unusual character that you see on that world and starts off a feeling that we are about to see something very different. Knowing your journey, how did working in the circus help with your work on Star Wars?

Doing creature performance is very hard. I was top of my fitness level at the time and I knew how to endure physical work over and over. Mentally it was hard. I wasn’t used to being in an enclosed space being pushed somewhere. That was a big challenge for me, not knowing how each day was going to be.

How do you feel about creature performance? From the previous interviews on this site it seems it’s much more technical and respected than many people think…

I knew nothing about it before doing it! You are sweating buckets in a costume and you have to act the action out, I had no idea about the art behind it. It’s a privilege and an honour to do it. You do a lot of movement work, working out the physicality of the character and there are a lot of technicalities there. I was an Ahch-To caretaker in The Last Jedi. Mark Jones was puppeteering me on that one in Ireland. Mark was in total control of me, my eyes, mouth and occasionally messed with me while I was moving around to which I thought, “I’ll get him for that,” but it takes an hour to get out of the costume so I never got him!

Personally, what would you say is your best story from working on Star Wars?

Learning how to be Rio in Solo, it must be that. Going in initially I had to rehearse on a scaffold frame, so I was in my element swinging around, which was very similar to the circus. We were coming up with all this creative stuff and then one day going, “Wow, they built the hauler,” which moved around, and I’m in costume – it was a proper stunt! I had cameras all around me and I even had a helicopter pilot come in and teach me how to fly convincingly as I wasn’t really doing that. Rio was quite fun as I could use his feet and swing around, that was my best memory.

Let’s talk more about Rio! I’m a massive fan of Solo and Rio was an incredible character. His movements and mannerisms made him more endearing, so how do you manage to convey all that? I’m assuming it involves a lot of motion capture?

There were motion capture spots on me and the face is CGI but obviously I don’t have four arms…no I grew two extra arms for the part! The top two arms are CGI, I had big shoulder joints where the next two arms should be which really restricted my movement, actually, because my arm could only go back a certain way. I had Rio’s little belly and they gave me a bit of a bottom. It was this awesome intergalactic onesie, the kind of thing I would have gone out raving in a long time ago!

There was another moment I remember where Rio is cooking dinner for Han, Chewie, Val and Beckett, which was really intimate. They were saying their dialogue but I was also doing it in that scene for continuity reasons when Dave Chapman was not around. Doing that with these incredible actors, you could feel the atmosphere. I was given vision for that scene and they had eye holes cut out because Rio was juggling a lot with pots and pans, which is very difficult to do if you can’t see!

It sounds like you have a lot of belief in yourself. Would younger you believe that you’d be working with the likes of Jon Favreau, Woody Harrelson and Alden Ehrenreich?

Do you know what that’s a really good question as my initial reaction is no, but really thinking about it the answer is yes, I would believe it, because if I didn’t believe that then I’d have spent my life being really frustrated that I hadn’t done something that I knew I could do. I think I did imagine being with Woody Harrelson once, but I was always passionate about circus work and movies and thought “Do you know what, I could do that.”

You run your own business teaching the skills you’ve learned now, right?

It’s a bit of a nine to five yes, my fall back is my passion which is not a bad place to be and I do what I really love to do – workshops,  events, festivals – and I perform on my aerial rig doing trapeze and silks and things like that. I like to get my customers, friends and family involved too, which is really nice.

What does the future look like for you, Katy?

At the moment I’m just trying to be the best circus performer that I can be. I’ve been teaching quite a lot, which I couldn’t do when I was doing Star Wars. I’m also a mum and I’m doing a psychology degree, so I’m not doing anything else for now. I’m sure something amazing like Star Wars will come again at the right time.

What a highly motivational Star Wars story that was! We thank Katy for her time and look forward to seeing her in future roles! Until the next time, I’ll be there for you…Cassian said I had to.