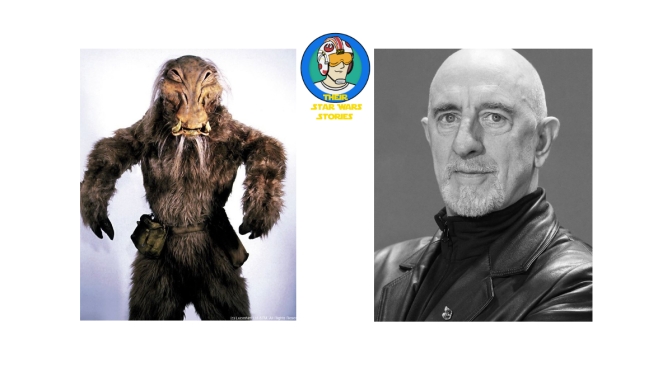 Greetings exalted ones, once again we are heading out the Dune Sea! Jabba the Hutt didn’t just like scum in his palace, he liked his music too. Max Rebo and his band entertained him regularly in between the odd Rancor butchering…

However, within his menagerie of monsters you would be shocked to find a pair of actual musicians chilling out in the corner. This brings us to our guest, Tim Dry. Tim played J’Quille in Return of the Jedi and also a Mon Calamari officer but he was more well known for popularising the robotic mime movement of the 1980’s with Tik and Tok. Along with his Yak Face playing counterpart, Sean Crawford, he played Wembley with Gary Numan and supported Duran Duran among many other impressive musical achievements.

Today we talk about his music background, how he ended up in Star Wars, a very heavy costume and if playing in front of Her Majesty The Queen (yes the Queen is making an appearance in a Star Wars story) is as intimidating as Jabba the Hutt…

Great to speak with you Tim and I’m excited to hear your Star Wars story! You are a man of many talents being an actor, photographic artist, musician, writer and a pioneer of robotic mime so what would you say you are most famous for?

I’d say that I’m equally famous for having two character roles in Return of the Jedi and also for having been a part of that whole New Romantic music and fashion scene in London in the early 1980s as a robotic mime, making electro pop music and hanging out with cool people who were fashion designers, DJs, musicians, and artists in the new clubs like Blitz, Le Kilt, Club For Heroes and Camden Palace. My other works as a writer and a photographic artist do get me some very nice compliments and some meagre funds but nothing resonates in quite the same way as the first two. As long as I’m constantly creative and do my best to entertain people in whatever ways I can I’m happy.

Tell us about your early career and how you got started…

I was taught mime by a wonderful teacher named Desmond Jones. I started going to his classes in London in 1976 and I became obsessed with this almost unknown art form. About six months later I became a member of his mime company and we were doing shows in colleges and small theatres around London. From 1980, I was also part of a multi-media group called Shock and we mixed dance, mime, music and theatre together in a way that no one had really seen before. Barbie Wilde (Hellraiser-Hellbound) was my partner at the time and she was in Shock as well. We met Sean (Crawford) at a mime class one evening and asked him to join the group.

Fast forward a couple of years and Sean and I were working as the robotic duo Tik and Tok after Shock split up. The robot movement that we created became very popular. It was a very exciting time! Shock recorded two singles which were big on club dancefloors, they were produced by the hip London DJ Rusty Egan (Founder of New Romantic Nightclub, Blitz) and Richard James Burgess (co-founder of synthpop band, Landscape). I started writing some songs with Richard before Shock split up.

How did all of that result in Return of the Jedi?

One day in early January 1982 we were contacted by Desmond our mime teacher who said that he’d been approached by the production team on the new Star Wars movie because they were looking for mimes to play alien creatures. The reason being that as trained performers in physical theatre we could bring life and character to a costume. There were about 20 of us auditioning in front of Desmond and the co-producer, Robert Watts. We were told to just do some ‘Alien acting’ which we did.

About a week later Desmond phoned and said that both Sean and myself had been chosen along with seven other mimes to be in the movie which was wonderful. We drove up to Elstree studios a few days later to be fitted for costumes. I was given this fearsome character who was then only known as Tooth Face (J’Quille) and Sean was to play Yak Face and we proceeded to take our places on the incredible set that was Jabba the Hutt’s palace.

We did about three weeks in the palace and then a few days on his sail barge which was filmed on the back lot at Elstree, the exteriors of the barge were all filmed in the desert in the States, watching Jabba get killed by Princess Leia. Very exciting!

We had another week playing Mon Calamari Officers on the flight deck of Admiral Ackbar’s rebel ship, wearing nice light costumes, after our really heavy and hot previous outfits it was nice to actually see where we were going! With the money we earned from our work on the film we bought a couple of synths, a drum machine, FX units and a four track Portastudio so we could create our own music for our live Tik and Tok work.

Personally, what would you say is your best story from working on Star Wars?

The whole experience of being on a film set for the first time was pretty mind-blowing. The scale of it all and the attention to detail was unbelievable. There were so many people on the Jabba’s palace and sail barge sets that we could hardly move and so some of the action we should have been doing was unfortunately shelved. You had the camera crew, big cameras, performers, extras, stunt people plus the enormous heat from the lights and the smoke machines going it was very claustrophobic. But it was great fun for us to see Leia in her famous bikini climbing over Jabba and strangling him with her chain and Oola dancing before she went in the pit!

I did approach Harrison Ford, who was seated in a canvas chair on set reading his script in-between set ups, I asked him for his autograph as my then girlfriend was a big fan. He raised his head and saw this guy with long dyed black hair, wearing a sweaty white t-shirt and these huge furry trousers held up by elastic which were the bottom half of my costume. He looked momentarily disconcerted then smiled and graciously signed my bit of paper. To my horror, later that afternoon I realized that I’d actually managed to lose it somehow on my way back to the dressing room. I didn’t dare go back and ask him for another and I didn’t dare tell my girlfriend what had happened. I just said that he was really occupied with his script…sorry!

The scenes with Jabba the Hutt are iconic now and it being the third film I would guess at that point the menagerie of monsters was almost a normal thing but how was it for you?

We were told early on that it was a kind of conscious recreation of the New Hope cantina by the designers and production team, so we knew what to expect. I have to say that the creatures in Jedi were much more involved and weirder than those in the first movie. Because of the confines of the costume and poor visibility there was no way to get an overview until we saw the finished movie. I remember feeling sorry for the Gamorrean guard who took a tumble down the steps and also the poor guy who got hurled into the Rancor pit.

Was J’Quille as heavy as he looked?

Quite simply yes! I had three layers on and the fibreglass head was very heavy. They had to take it off between each take so I could get some air. The wardrobe girls would blow cold air from hairdryers down my neck. Some of the performers did actually pass out on set on day one before someone noticed what was happening. J’Quille was a heavy dude in every sense and not someone you’d pick a bar fight with!

I have to address this as I have a thing for action figures, Yak Face is an extremely valuable older figure and J’Quille I believe has been hard done by although he’s got a newer one, may I start a “Justice for J’Quille” movement?

Yes, please do! His time will come!

What’s more intimidating; playing at Wembley, playing in front of the Queen or working for Jabba the Hutt?

Working for Jabba was a doddle! Playing Wembley wasn’t that intimidating really as because of the stage lights and the distance from the thousands of fans you couldn’t really see beyond the first few rows. Playing in front of The Queen was pretty nerve-wracking as it was done live in front of not only her and Prince Phillip but also in front of 14,000,000 people watching at home. We’d already done a show that night with Gary Numan on his Warriors tour out of London and a limo picked us up and drove us to the stage door of the Theatre Royal.

Yourself and Sean are on the convention scene together a lot, how do you feel about attending conventions?

We both love doing them. We’ve been all round the world now pretty much since 2003 and that’s a real thrill. We get to hang out together again and be naughty schoolboys! We love meeting and chatting to all the fans that come to the events, hanging out with fellow performers, having a few drinkies and some laughs. We also get to make a nice amount of cash which is always needed!

Because of COVID-19 everything has been on hold this year. Hopefully, things will settle down safely and we’ll be able to be out and about next year with our photos and our Sharpie pens.

It still amazes me that my modest contribution to a movie made 38 years ago still resonates with people of all ages from every country. Nowadays we get three generations of Star Wars fans coming along to see us and that really is incredible. I don’t think any other movie franchise has the same breadth of adulation and it really does make me proud to see all those happy faces. I shall be eternally grateful to Desmond, my mime teacher, for allowing all this to come to pass because of the skills that he imparted to me and his students all those years ago.

With that, Tim departs to his first virtual convention. In the absence of physical conventions, you can contact Tim for autographs via Facebook here.

Did you enjoy reading this interview? Why not check out the Star Wars story of fellow creature performer, Paul Warren who portrayed Varmik in The Force Awakens by clicking here.