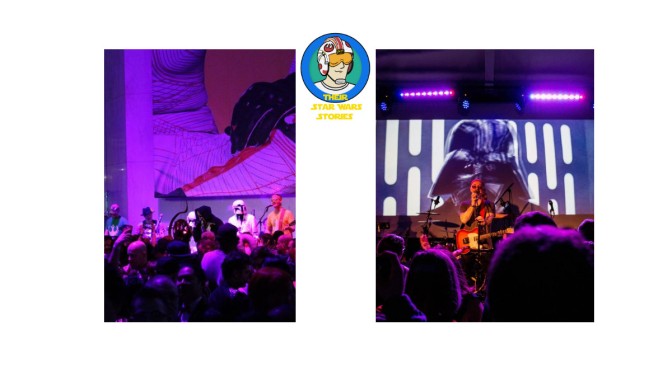 Welcome back readers, this is an unexpected pleasure, we are honoured by your presence.

Dispensing with the pleasantries, this time around we have a different group of guests bringing you their Star Wars story. Your eyes do not deceive you; ‘group of guests’ is correct or more accurately, a band! This site isn’t only to tell you stories of people involved in the filming of Star Wars but also fans with an interesting story or two to tell. Blues Harvest are a band made up of Nick (Lead vocals), Adam (Guitar), Andrew (Keyboards), Jess (Bass guitar) and Andy (Drums).

Blue Harvest was the working title of Return of the Jedi and carried the working tagline “Horror Beyond Imagination” in order to keep filming as secret as possible, a convenient title to make use of for a blues playing band! Name-puns, Mark Hamill endorsement and more is covered as we chat all things Star Wars music!

Blues Harvest, welcome and congratulations on being the first fans to feature on the site, and a fantastic group of fans you are too! Andy, you are the drummer in the band and have the pleasure of being spokesperson on these questions, what is your band’s connection to Star Wars?

All five members of Blues Harvest are huge Star Wars fans as well as musicians. Outside of the band we all live fairly Star Wars filled lives, from collecting figures to hosting panels at conventions and even writing and illustrating canon Star Wars content. Our frontman, Nick Brokenshire, is a comic book illustrator and has penned several tales for IDW’s ‘Star Wars Adventures’.

Impressive, most impressive. So how did your band come together?

In 2013 there was an opportunity for some musicians to perform at a ‘Dinner with the Stars’ event for Burnley’s ‘Star Wars Fan Fun Day’ and at the time we were a group of friends who met regularly to record a geek podcast so the idea came out of discussions on that show. We had the idea of forming a band to play a selection of classic blues and R&B songs with ‘a Star Wars twist’ and Blues Harvest was born.

We still perform some of the songs we re-wrote for that first show, namely Death Star which is based on Eric Clapton’s ‘Crossroads’ and Obi-Wan Kenobi, based on Stevie Wonder’s ‘Superstition’.

Your band’s name will raise a few smiles in the Star Wars community, what made you settle on that name?

We went through a lot of puns at first, ‘Chewie Lewis and the News’, ‘Boba Fett Shop Boys’ and ‘Abba the Hutt’ were all contenders. But since we play Star Wars blues songs, we got to the original working title used during the filming of ‘Return of the Jedi’ and added the letter s. Now if anyone asks, I tell them we take our name from season one, episode 12 of the Ewoks cartoon named ‘Blue Harvest’!

Alternative band names from the Ewoks cartoon; ‘The Travelling Jindas’, ‘Rampage of the Phlogs’ and ‘A Gift for Shodu’, seriously if anyone is in the market for band names the 80’s Ewok cartoon is where it’s at! So now we know how you came to be, what’s the band’s best Star Wars story?

We’ve had lots of amazing Star Wars experiences but for us the highlight has got to be Star Wars Celebration in Chicago. We had the distinct honour of being invited to perform at ‘A Night at Canto Bight’ – a multi club bash with 3,000 Star Wars fans in attendance. During the show we invited several special guests onto the stage to join us as we kept the party rocking, including our buddy ‘Darth Elvis’, Jett Lucas (Son of George), Taylor Gray (Ezra Bridger, Star Wars Rebels), Vanessa Marshall (Hera Syndulla, Star Wars Rebels), David W. Collins (Star Wars: Resistance) and a #MysteryPorg who is a Star Wars celebrity whose identity remains hidden, for now.

You have a bunch of honorary band members there and the list keeps on growing! I understand Jerome Blake (Mas Amedda, The Phantom Menace) and Laurie Goode (Hrchek Kal Fas, A New Hope) are also on the list of Star Wars personalities to perform with you. Who made the biggest impression?

The first celebrity to join us on stage made a huge impression on us, Stephen Costantino. Stephen played a Gamorrean Guard in Return of the Jedi, and in real life plays a mean guitar! He was a guest at an event we performed at and accepted our offer to join us on stage; he enjoyed the experience so much that we organised a second impromptu show whilst he was still in the UK. For us this paved the way for a multitude of guests who have since become ‘honorary band members’ and he’s welcome to join us for a jam whenever he likes!

Your material is getting diverse and because of your convention links you got to sing “Ghostbusters” with Ray Parker Junior, what were the excitement levels for that like?

Performing with Ray was one of our shared highlights as musicians. The Ghostbusters theme is a song that’s so well known, especially amongst the geek community, and being able to play live with the man himself was an absolute dream come true.

Other than that we’ve also been able to explore music from other franchises such as the Marvel movies; one time we had an amazing opportunity to perform The Avengers theme at Disneyland Paris, we’ve also performed songs from Back to the Future, I think we have to give thanks in part to the awesome ‘Guardians of the Galaxy’ soundtracks for the varied opportunities.

We understand you have a special Star Wars fan, pretty much the master of Star Wars fans…what’s it like to hear feedback on your music from Luke Skywalker himself?

We rewrote the lyrics for The Kinks ‘Waterloo Sunset’ to ‘Tatooine Sunset’ and we had an idea that Mark Hamill might one day hear it but had no idea he would respond so quickly and so warmly!

He absolutely loved the track and tweeted us saying “Magnificent! I now declare this as my official, unofficial Luke theme song!” Reading that pretty much blew us away… Luke Skywalker himself has heard our music!

This is about as close as Their Star Wars Stories will get to interviewing Mark Hamill and we are OK with it. Back to music itself, Star Wars has created such close associations with characters based simply on music, how as musicians do you feel Star Wars achieves that so well?

Two words: John Williams. Without him Star Wars just simply would not have been nearly as successful. The themes he’s effortlessly developed make us love the characters in that galaxy far, far away, from Luke’s theme in the original movie through to Rey’s theme in the sequels. We love performing some of these themes on stage and introduce them in our music where possible.

To finish, a quick game of Kiss/Marry/Kill here with 3 of the most recognizable tunes, Duel of Fates, Binary Sunset and Imperial March?

Tricky question, let’s say we would kiss Imperial March and marry Binary Sunset. We would kill Duel of Fates, because it’s music to kill a Jedi to!

Blues Harvest regularly play in the UK and you can read more about them by clicking here.

Check out their appearance at Star Wars celebration, Chicago here.

Did you enjoy reading this interview? Why not check out the Star Wars story of honorary band member and Gamorrean Guard, Stephen Costantino by clicking here.

Enjoyed this story readers? Are you a fan with a cool story to tell? Tweet us @TheirStarWars and let’s have a chat! Until the next time readers, I’ll be there for you…Cassian said I had to.